This Ontario woman may need to downsize, work part-time to meet her retirement goals

The first step for Amy is to improve her tax efficiency, expert says

In Ontario, a woman we’ll call Amy, 57, works for a community organization. She has no dependents and just one debt of $25,000 used to buy an investment. Her financial goal is a sustainable $40,000 per year — or $3,333 per month — in after-tax income when she retires at age 60. That’s approximately her present spending minus savings and loan repayment.
A decade ago, Amy made a large investment in an RRSP-eligible mortgage company that encouraged savers to dip deeply into their savings

Family Finance asked Derek Moran, head of Smarter Financial Planning Ltd. in Kelowna, B.C., to work with Amy. He notes that she has $1,384,444 of total assets including her condo. That sum includes $451,444 of financial assets including $80,000 cash. Her net worth is $1,359,444. Her investment portfolio is largely a list of high-fee, mostly fixed-income mutual funds.

A decade ago, Amy made a large investment in an RRSP-eligible mortgage company that encouraged savers to dip deeply into their savings. She made a big bet on the business and lost $211,000, which was 70 per cent of her RRSP’s value at the time.

“I knew property was soaring and it seemed like a way to get in on it,” she recalls. She gambled on what she believed to be a sure thing. The only sure thing was the fat incomes for investment managers and salespeople. Her reaction has been to invest in low-return assets that do not pace inflation. 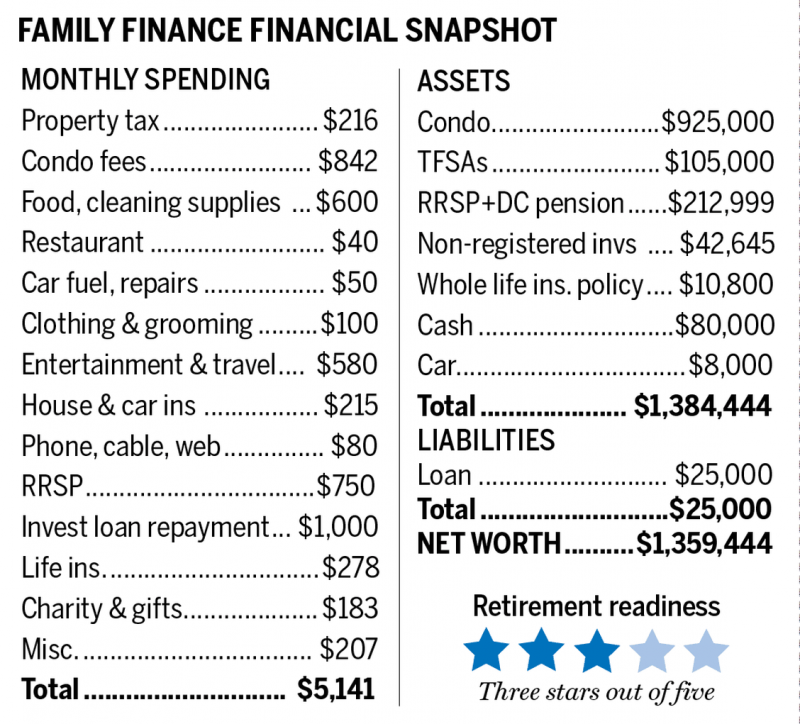 The first step for Amy is to improve her tax efficiency. She has $104,954 of RRSP contribution space. She generates a further 18 per cent of salary for RRSP space, which works out to $17,159 per year. For four years, that adds up to $68,636. Combined with her present RRSP room, she can add as much as $173,590 without over-contributing. She can get a 30 per cent tax refund for any RRSP contributions she makes while working but will probably have to pay tax at no more than 15 per cent when she takes the money out in retirement.

She also has a source of money in a whole life insurance policy with $50,000 face value and $10,800 of cash value. She has no children to whom to leave money, so she could cash out the policy and use the cash value for the RRSP or donate the policy to a charity for a tax benefit. Her present spending includes $278 monthly for whole life coverage.

Amy’s RRSP and LIRA, including her work-based defined-contribution plan, total $212,999.

Amy’s goal should be to use the RRSP to bring her taxable income down to $49,020 which is the top of the first federal tax bracket. That way, she will optimize her tax refund. Some of the contribution can be deferred and deducted next year, Moran explains. Refunds can go back to her savings.

Those funds growing at three per cent per year for the following 30 years will support a taxable income of $25,096 per year.

Before age 65, Amy will have TFSA cash flow of $5,979 per year and RRSP income of $25,096, total $31,075. After 12 per cent average tax excluding TFSA income, she will have $28,060 per year to spend. She would come up substantially short of her after-tax target income. Options to close the gap included part-time work or downsizing from her $1-million condo to a $500,000 unit and using cash, say $12,000 for five years to age 65, to stay in the black. It would allow her to add to her financial assets and their income-producing potential.


Rebalancing to make her dwelling, a smaller condo perhaps, just a third of total assets would liberate value for investment, particularly stocks that pay solid dividends of three per cent to four per cent a year issued by companies that have a history of raising payouts. Lists of these dividend aristocrats are readily available online.

The condo sale yield would be reduced by preparation and selling costs at five per cent of value, but the remaining balance $878,750 less $500,000 for new digs, would leave $378,750 for expenses and investment. Invested at three per cent after inflation, that capital’s permanent income would be $11,362 per year or $947 per month. Her total annual income would rise to about $42,400 before tax. After 13 per cent tax that would leave her about $37,675 per year or $3,140 per month to spend. She would still be below target. Part-time work would close the gap to her $40,000 after tax target.