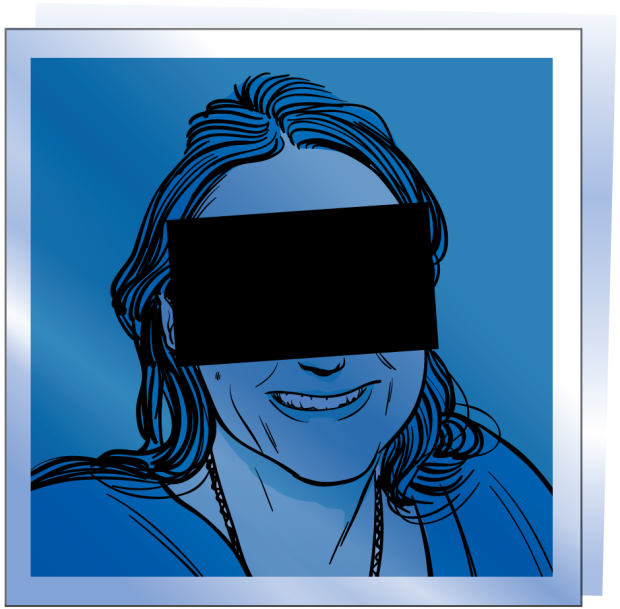 Andrew Allentuck
Situation: A couple must cope with a recent layoff and substantial debts that jeopardize retirement plans
Solution: Sell rental property to raise cash flow; use wife’s income, investment income and pensions
A couple we’ll call Jim and Terri have hit a snag in their financial planning since he was recently laid off from his job at a cheque processing firm in Alberta.

Before the layoff, they had planned to renovate their home and travel. Now those plans are uncertain as is when they can safely retire.
Jim, 62, hopes to find another job, but does not expect it to match his former income. Terri, 55, hopes to stay in her job as a management consultant for another five years. Neither has a company defined-benefit pension, but their children are grown and independent.
Fortunately, Jim’s employer will continue to pay his $10,866 monthly salary until November 2017, netting him $7,200. Terri, meanwhile, brings home $4,500, and they have $1,250 in net rental income to make their total after-tax monthly income $12,950.
If Terri works to 60, as initially planned, her income and savings will allow the couple’s well-laid retirement plans to go ahead. But if she quits sooner, they may not have enough to support their current spending including debt servicing.
They owe $164,000 on the condo they rent out, and another $43,000 on a line of credit that is in effect a non-amortizing condo loan.
To stay afloat with a reduced income, they plan to sell the rental property and slash their cost of living so that they can get by on $50,000 a year, less than half of their current spend.
“We would like to remain in our home for 10 to 15 years if we can and then sell our house and move into a rental property,” Jim said. “We will need to cut the risks for our investments and to time the conversion of our RRSPs into RRIFs.”
Family Finance asked Derek Moran, head of Smarter Financial Planning Ltd. in Kelowna, B.C., to work with Jim and Terri. In his view, the situation is fixable.
Their $383,000 home, he notes, is a conservative 34 per cent of their net worth, they have $40,000 in cash available and they have substantial equity in their rental condo.
Raising Cash, Cutting Costs
The couple’s financial assets add up to $638,000, most of which are in RRSPs and other pension plans. They can raise cash by selling the $275,000 condo and using the proceeds to pay off the mortgage and line of credit. 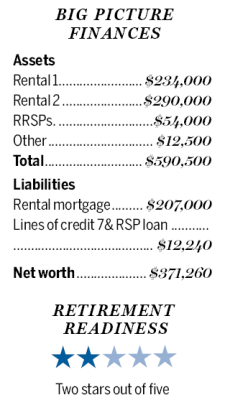 They currently pay $6,560 a year in interest alone (not counting growth of their equity), $3,720 in condo fees and $1,800 in taxes. That leaves $2,920 net income on $68,000 of equity, a return of four per cent, not much for a leveraged investment subject to rising interest rates and the usual risks of vacancy and tenant damage, Moran notes.
But selling the condo would net them about $50,000 after some primping and selling expenses.
At present, Jim and Terri spend $12,950 a month, but $4,970 is for savings, $440 is life insurance and $1,723 is debt service. If those costs are eliminated, monthly spending is a reasonable and manageable $5,817.
Eliminating the $1,000 they set aside each month for travel would mean their spending would almost be covered by Terri’s $4,500 net monthly income.
Retirement Finance
In retirement, assuming Terri quits fairly soon, the couple will have $493,000 (present value) in their RRSPs and Locked In Retirement Accounts (LIRAs).
If this money grows at three per cent after inflation until Jim is 65 and Terri is 58, and if RRSP contributions of $2,370 per month continue for six more months until Jim loses his termination pay, the sum would rise to about $565,000 in 2017 dollars.
If this sum continues to grow without additional contributions and is spent over the next 27 years until Terri is 85, it could produce $30,800 each year.
Their TFSAs total $105,000. With three more years of contributions at $5,500 per year for each account, they would be worth $149,750 and support an indexed, tax-free income — assuming three-per-cent growth over inflation — of $8,170 a year for 27 years.
There will be some cash left over if they sell the rental condo and pay capital gains tax. If they can come up with $100,000 in additional cash from various sources including cash savings — currently $20,200 a year after TFSA contributions of $5,500 each — they could allocate an extra $60,000 to their TFSAs.
If that money grows at three per cent a year, it would become $65,570 when Jim is 65 and provide annual income of $3,576 for 27 years.
In addition to their investment proceeds, Jim can count on full Canada Pension Plan benefits of $13,370 a year, Terri will get about 70 per cent of the maximum or $9,359, and both will get full Old Age Security benefits of $6,942 a year.
Income Will Come in Stages
Before Terri’s intended retirement at age 60, their total income before tax is $62,858: $30,800 from registered plans, $8,170 from tax-free TFSAs, Jim’s $13,370 CPP and $6,942 OAS benefits, and an estimated $3,576 in taxable income.
After splits of eligible pension income and 15-per-cent average tax, they would have about $4,700 a month to spend. That would be below their expected spend of $5,817 with the condo sold, but cutting travel and a few other small items would help.
When both Jim and Terri are both receiving CPP and OAS, their income would be $79,159 a year: $30,800 from registered plans, $22,729 in combined CPP benefits, $6,942 each from OAS, $8,170 in TFSA income, and $3,576 in taxable income.
After adjustments for age and pension income deductions, they could pay the same 15-per-cent tax rate, and have about $5,650 a month to spend. Selling one of their two cars would keep them within their budget and allow a reserve for unexpected costs.
“This is a case of a career interrupted, but they live below their means,” Moran said. “That has helped to reduce retirement risk.”
(C) 2017 The Financial Post, Used by Permission