Andrew Allentuck
Situation: Young family wants to buy a condo for visiting relatives, retire in late 50s, but has little cash
Solution: Forget the visitors’ condo, build RESPs for kids, add life insurance, build up TFSAs
In British Columbia, a couple we’ll call Harry, 39, and Wendy, 38, have a thriving life. They have two children — the eldest is two and the other just a few months old — jobs that produce a $9,100 combined take home income and pre-tax universal child care benefits of $320 a month, or $240 a month after tax, bringing their take-home income to $9,340 a month. They do scientific work for the provincial government and have defined benefits at retirement. Yet they have financial assets of just $21,700, which at their ages is modest. Wendy expects a $19,000 windfall payment from a labour agreement. Even with that, their resources for raising their children will be strained.
At present, they put just $50 a month into their children’s Registered Education Savings Plans, nothing into their RRSPs and $800 into their tax-free savings accounts — less than half their allowable amount and just an eighth of what they might use to fill their space. They have not made wills or appointed guardians for their children.
“We work hard to be debt-free, to put sweat equity into our home, and to buy with cash rather than credit,” Harry explains. “Early retirement, say 55, is our goal.” 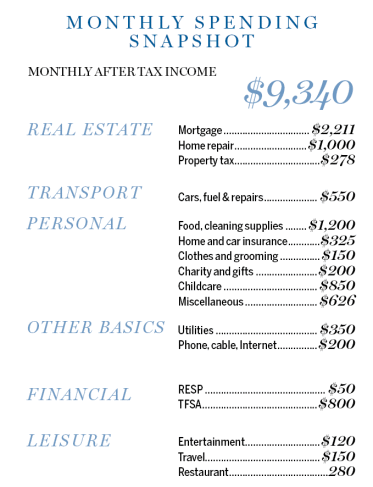 They want to buy a condo for the children’s grandparents to use when they are in town and to rent out at other times. But does buying a second property make sense and, they wonder, what would its effect be on other goals such as funding the kids’ educations and their own retirement?
Family Finance asked Derek Moran, head of Smarter Financial Planning Ltd. in Kelowna, B.C., to work with Harry and Wendy.
Present Finances
Harry and Wendy will have solid defined benefit pensions if they stick with their jobs until retirement. But age 55 is not likely to work, Moran says. They owe about $410,000 on their present 3.09 per cent mortgage. It won’t be paid off until 2039 when Harry is 63. Their children’s RESP has a balance of just $1,300. It is underfunded, even for the two-year-old who has $5,000 of contribution room, plus potential Canada Education Savings Grant allowance of $500 per child per year before age 18. The parents hold $7,500 in cash.
The Kids’ Needs
Simple things first — put $6,200 into the RESP to fill the existing space for the two children and add the CESG of 20 per cent of contributions, or $1,240. If the parents add $5,000 per year for the next 15 years until the eldest child is 17, when the CESG stops, and $2,500 for two years until the younger child is 17, then at three per cent growth for the period, the fund will have $128,600 when the younger is 17. Two more years of growth for $3,000 a year for two years would add $6,300. If the funds are split, each child would have about $66,000 for post-secondary education, enough to cover tuition anywhere in Canada and all bills for tuition, room and board anywhere in B.C.
They should also buy $500,000 10-year term life insurance for $500 to $600 a year total for both parents. In a decade rates would rise, but the period of need would be shorter. 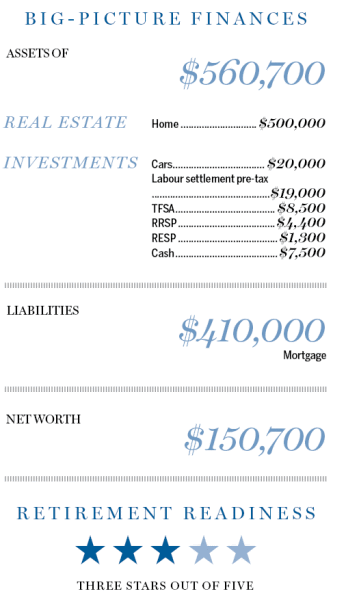 Retirement Finances
The $19,000 windfall is really a wage settlement and will be subject to tax at Wendy’s rate, 29 per cent, so that she will net $13,490. If that money is directed to the mortgage, it will reduce total interest payable over the life of the debt by $13,743 and the amortization will be cut by 13 months.
Their retirement funds are likely to be just job pensions. Their present jobs provide pension contributions so their RRSP space is drastically reduced by the pension adjustment. Given their other needs, they can just forget about adding to their RRSPs. Over time, they can direct money now going to child care to their TFSA. Their children’s needs will grow and it is unlikely that Harry and Wendy will have much surplus before they reach retirement age.
If Harry works to 59, he would get a job pension of $3,401 a month plus a bridge of $727 to 65. That’s $49,536 a year before tax. If Wendy works to her age 59, she would get $2,989 a month plus a $944 monthly bridge to 65, total $3,933 a month or $47,196 a year. Their total income would be $96,732.
If Harry, who immigrated to Canada at age 30, works full time to age 59, he will have 29 years of maximum Canada Pension Plan credits or 73 per cent of the CPP maximum annual benefit, $13,110 in 2016. That would give him $9,570 a year. Wendy will have 43 years of CPP credits. If she qualifies for 92 per cent of the maximum benefit, she would receive about $12,060 a year at 2016 rates.
Screen Shot 2016-01-15 at 12.39.05 PM
Harry will have 35 years as a resident of Canada at age 65 when he is eligible for Old Age Security, assuming the OAS qualification age reverts and holds at 65. His benefit will therefore be about $5,990 a year. Wendy will get the full annual OAS payment, $6,846 in 2016.
Adding up their pension components to age 65, Harry would have $49,536 a year from his job pension and Wendy would have $47,196 a year from her pension, for total annual income of $96,732. At 65, Harry could get $9,570 from CPP and, a year later, Wendy would get $12,060 from CPP. Each, at 65, could receive OAS, but they would lose their combined monthly bridges of $1,671 a month or $20,052 a year. Their total, permanent income at 65 and after would therefore be $111,146 before tax. With age credits and pension splits to average income, they would pay average tax of 14 per cent and have $7,965 a month to spend.
Their present expenses, $8,500 a month, would drop in retirement when they eliminate commuting costs, childcare and TFSA contributions, leaving $6,555 of monthly expenses. Their retirement incomes would cover their bills.
Retirement before 65 would mean a combined loss of $15,013, or $1,251, from their job pensions. They can’t afford that much of a shortfall.
Their present budget does not allow for purchasing another condo. They have no money for a down payment. Assuming that they could borrow $300,000 for a condo after making a 20 per cent down payment, their monthly payment would be $1,420 for 25 years. The mortgage would be paid in 2040, 12 years into a retirement beginning at 59 when income would have dropped. It’s not feasible, Moran says.
“I think the couple will do well and that their children can have their post-secondary educations funded,” Moran says. “But buying another condo or adding heavily to any other expenses is not possible. It is not a priority and it is risky. They cannot afford to leverage their futures with more debt. They should work within their means. That will be the security they need.”
(C) 2016 The Financial Post, Used by Permission