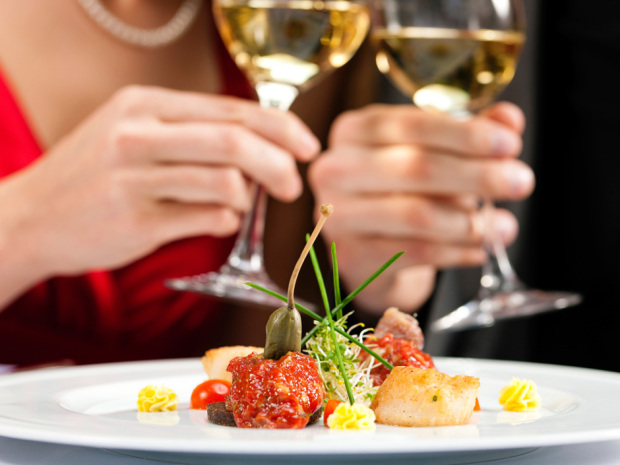 This couple spends almost $1000 monthly on dining out - an expense they will have to cut if they want to reach their financial goals.
Andrew Allentuck
Solution: Sequence spending: pay down debts, then get house, then save for kids, then retirement
Jack and Marianne bought into Vancouver’s hothouse property market in 2010 and now have a 650-sq.-ft. condo with a currently assessed value of $387,000 financed with a $389,000 high-ratio mortgage which carries a 3.75% interest rate for 35 years. There’s also a $24,900 student loan with 5.35% interest.
The debts cost them $1,667 for the mortgage and $391 for the student loan, total $2,058 a month. Married last year, debt is their entrée to life in a very expensive city.
Both 31, they are secure in their jobs: Marianne is a chemical engineer with a large company that will provide her with a defined benefit pension; Jack is a consulting engineer for a company that does materials design for the construction industry. The employer does not provide him a company pension.
Their goals: buy a move-up house in the $550,000 range, which they would design and build themselves, start a family of two or three children, then retire in their early 60s. For now, they bring home combined income of $9,522 a month.
“We have stretched ourselves pretty thin,” Jack explains. “Our problem is to see the future.”
Family Finance asked Derek Moran, head of Smarter Financial Planning Ltd. in Kelowna, B.C., to work with Jack and Marianne. “They have to become serious about debt reduction and savings,” he explains, “If they don’t cut debt, it will be an impediment to their future as a family.”
Bad investments, risky debt, young kids, and no fear of spending: How this couple can retire comfortably
Quebec couple with new child wants $750,000 house and retirement plan

The Budget
It is a problem of perspective, the planner says. The couple, who are using most of their savings capacity to pay off their wedding, has almost no savings on their balance sheet. There is pressure to have children before Marianne reaches mid-life. That short window is a problem. As well, retirement at 60 or so narrows the time to save for retirement.
They can do a lot to raise savings. They can accelerate payment of the $24,900 student loan. If they use present savings capacity of $2,085 a month and add it to the $391 they already use to pay down the loan, it will be eliminated in 10 months. That will liberate almost $400 a month. They can save on restaurants — an astonishing $970 a month; travel — $1,000 a month; and clothing and grooming — $400 a month. They can easily harvest $1,000 a month by being frugal.
Moving Up
Their dream house is a bungalow with 1,100 square feet, but with two or three children, it would be cramped. When Marianne takes maternity leave, the couple’s annual income would drop by $60,000, the difference between her salary and parental benefits, just as their lives are becoming more expensive. Savings would suffer.
The larger house must be financed with a mortgage. If they can find what they want at the $550,000 price outside of Vancouver, they will be starting fresh with a new downpayment. They will have to shop hard, since average detached home prices in B.C. in the first quarter of this year were about $618,000, according to the Canadian Real Estate Association. They have no equity in their condo for part of the purchase price.
Paying for a $550,000 house at $2,874 a month with a 20% downpayment and 3.5% interest beginning in, say, two years, would leave $440,000 to be financed. With a 30-year amortization beginning when they are 35, they would pay $1,975 a month and have clear title when they are 65.
Best bet: If they cut discretionary spending by $1,000 a month and add it to current savings of $2,085 a month and liberated student loan payments of $391 a month, they will have additional savings capacity of $3,476 a month for a 20% downpayment of $110,000 in 32 months.
Kids
Jack and Marianne will want to establish RESPs for their children. If they have their first child in 2018, and save the maximum $2,500 per year for that child to qualify for the $500 Canada Education Savings Grant, $3,000 total a year, they will amass $67,250 at 3% for 17 years to university entrance. That would cover four years of tuition and books at any university in B.C. for one child.
With two children, costs become a larger challenge. With three, costs and a larger house would be hard to support, especially if Marianne, who is the main breadwinner, takes off the conventional 11 to 12 months to provide parental care. She might trim the time and use day care or a nanny, but that could be even more expensive.
Retirement
Marianne has $21,330 in her RRSP. If she continues to add $300 a month and if the account grows at 6% a year less 3% for inflation, it will have $217,940 in 2015 dollars when she is 60. With the same inflation rate, she could withdraw $10,800 a year in 2015 dollars to her age 90.
Marianne has a defined benefit pension. If she can work for 30 years and base her pension on the average of her best five years’ salary, currently $98,140 a year, and get 2% of that times years worked, she would have $58,900 year before tax. If she takes time off for child-rearing, her tenure might be reduced. Cut it down to 25 years and her company pension would be $49,070 a year.
Jack has no RRSP savings. However, if he puts $500 a month into an RRSP on the same terms as Marianne, then when he is 60, the plan will have $279,500. If that balance continues to grow at 3% after inflation and all capital and income is paid out to his age 90, it would provide $13,850 a year.
Their problem comes down to the fact that they cannot have it all
We’ve made no assumption for TFSAs as it’s unlikely there would be much cash for them.
Adding it up, at age 60, they would have total RRSP income of $10,800 + $13,850 = $24,650, a defined benefit pension for Marianne of an estimated $58,900 a year for total income of $83,550 or, with reduced tenure for Marianne, $73,720.
At 65, they could draw full CPP benefits of $12,780 each for total income of $109,110, or (with reduced tenure) $99,280. At 67, each would get full OAS at $6,765 for permanent income of $122,640, or $112,810. After 18% average tax, they would have $8,400, or $7,700 a month to spend.
This is the best-case scenario, but the couple’s chances of having the house, maxed RESPs and this retirement income are dim, the planner says. “Their problem comes down to the fact that they cannot have it all.”
(C) 2015  Financial Post Used By Permission