Andrew Allentuck
Situation: Anticipating retirement, couple with $900,000 house must pay off debts to retire
Solution: Use tax strategy to build savings in next seven years, do renos and pay down debt
A British Columbia couple we’ll call Harry, 56, and Julia, 54, have built a good life with $1.3 million net worth — a hefty amount for a couple with take-home income of $6,362 a month. A strong balance sheet with an average income is not unusual in B.C.’s Lower Mainland, where property prices have soared. Their house, with a price tag of $900,000, is 67 per cent of net worth. They paid just $290,000 in 2001. Fifteen years of appreciation has made the house their largest asset. 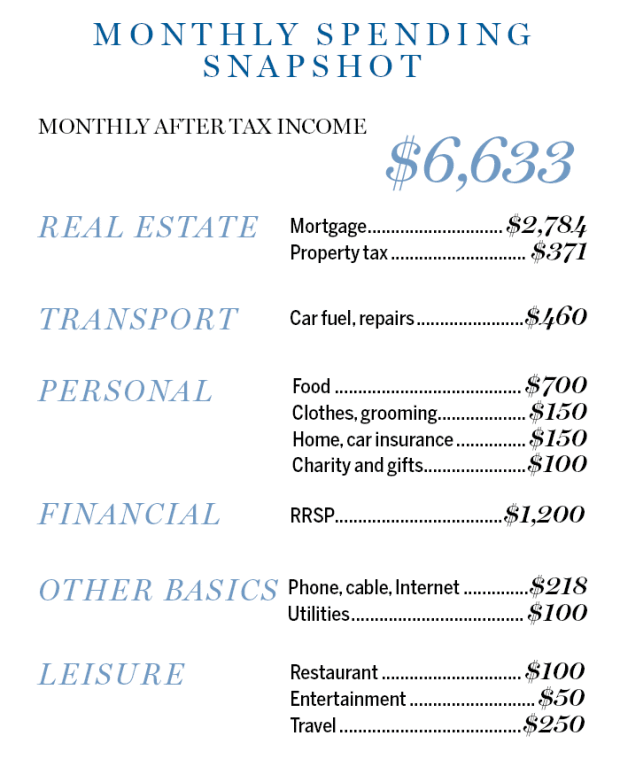 Harry and Julia have two children, 18 and 21. The 18-year-old is still in school. His RESP can take care of tuition and other expenses until graduation. The 21-year old is financially independent. Their good life has been enabled by the exceptional appreciation of their house. Their mortgage on the property made possible its exceptional value and growth.
Harry, a management consultant, and Julia, a part time office administrator, have just $50,000 remaining on their mortgage — a fixed-rate note for five years with a 2.94 per cent rate of interest. It costs $2,784 a month, almost 42 per cent of their budget, but it has helped the couple to build their wealth. At the present rate of debt reduction, the mortgage will be paid in full by 2018. Mortgage payments can then be directed to their $37,000 line of credit, which would be paid a year later. Juggling debts with expenses has meant that they have not built any tax-free savings accounts.
“We would like to retire at 63 so we can enjoy life while we are still healthy,” Harry explains. “And we don’t want to leave our family home, for it is ideally situated for pursuing our sports.”
At retirement, likely when Harry is 63, their income should be sufficient to maintain their way of life. But it could be close. If they do $80,000 of renovations to their house and pay off the line of credit, their investment capital, which will provide most of their retirement income, would be reduced by a fourth. They have no company pensions. They need to raise their retirement savings, explains Derek Moran, head of Smarter Financial Planning Ltd. in Kelowna, B.C.
Harry and Julia have a rental suite in their home, which is currently occupied by their son. If he leaves, they could rent it out for $9,000 a year after expenses. He is likely to continue to use it until graduation from his post-secondary program, but he could stay longer. Since we cannot estimate when rental income will begin, it is not included in our retirement projections.
Selling income properties will give Alberta couple’s retirement finances the lift they need
Affluent Alberta couple must build up inflation protection, tidy their messy portfolio
Savings Strategies
Harry has about $75,000 of available RRSP contribution space he could fill. He generates $17,280 for each additional year he works. His present contribution rate is $14,400 a year. It might be possible to take money out of Julia’s $202,000 RRSP. Her income is very low, so she would pay little or no tax on withdrawals. But her account is spousal and the last contribution year, 2015, means any money taken out will be attributed back to Harry. They would need three full calendar years to make a swap work tax-free, Moran notes. So this tactic won’t work.
To generate more retirement income, Harry will have to build up his RRSP. He and Julia have $453,778 saved and add $1,200 a month. If he can maintain contributions for the almost seven years to his retirement and obtain a return of three per cent after inflation and fees, the RRSPs would have $661,444 in 2015 dollars. If that sum were annuitized so that all income and capital is paid out in the 27 years to his age 90, it would generate $35,039 a year in 2015 dollars.
If Harry and Julia add what they are putting into their mortgage, $33,408 a year, to their RRSPs, then, beginning in about 30 months when the mortgage and line of credit are paid off, the sum of RRSP plus mortgage money would be $788,000. That would support pre-tax income of $42,800 for the approximately 26 years of retirement to Harry’s age 90, Moran estimates.

Contributions to Harry’s RRSP would generate tax refunds of about 30 per cent. His increased annual contribution — the $14,400 a year he already contributes plus $33,408 that currently goes to paying the mortgage — would be $47,808, yielding annual tax savings of $14,350, $11,000 of which could be added to TFSAs. Julia and Harry have no TFSAs now. Over the approximately six years between mortgage elimination and retirement, the total of their TFSA contributions would be $66,000. That could generate $3,600 a year on an annuity growing at three per cent a year and paid for 26 years from mortgage elimination to Harry’s age 90.
Setting Priorities
There is a “however” to this estimate. If Harry and Julia spend $80,000 on their home, as they are considering, they would not have the capital to fund TFSAs. So, we will exclude TFSA income from our calculations.
Retirement investment income would be $52,000 a year, supplemented by Canada Pension Plan benefits of $13,110 at 65 for Harry and $3,251 for Julia. At 65, Harry would receive Old Age Security benefits of $6,846 at present rates. Julia would have to wait to age 66 to get the same OAS benefit.
Adding up the sums and assuming that they continue to carry the line of credit after it is paid down or extended to pay for the reno, the couple would have investment income of $48,200 for two years to Harry’s age 65, then Harry’s CPP income of $13,110, Julia’s CPP of $3,251 at her 65, and two $6,846 OAS payments beginning when they are 65 and 66, respectively. The final sum would be $72,853 before tax or $5,440 a month after 12 per cent average income tax, Moran says.
That would support present expenses of $6,633 a month less $2,784 monthly mortgage payments, $1,200 RRSP contributions and potential deferral of $371 property taxes – a program available to B.C. residents over 55 at a cost of one per cent of the amount of tax deferred on a cumulative but non-compounding basis. Expenses would drop to $2,278 a month.
All of the couple’s RRSP money is invested in one bank’s mutual funds. They could shift to exchange traded funds with fees averaging a fifth of those they now pay. The boost in returns could add a third to investment income.
Years of investing in their house via the mortgage will pay a bonus, as the appreciation of the house will eventually be tax-free, not just the postponement of taxes that RRSPs achieve. The house turned out to be a superb investment. That is a characteristic of the B.C. property market, but it may not last. Adding even more money to the house through renos will no doubt provide value and pleasure, but it is the antithesis of diversification. Building financial assets is vital to a balanced portfolio, Moran says
(C) 2016 The Financial Post, Used by Permission