Alberta Economy has Cut into this Family’s Income, Posing a Challenge to their Retirement Planning

Andrew Allentuck
Situation: Unemployment challenges retirement plans of two-income family with child
Solution: Enhance investment returns, stop RESP contributions when CESG ends, retire at 60
In Alberta, a couple we’ll call Henry and Sally, both 45, are finding their lives entwined with the fate of the Alberta economy. As a self-employed marketing consultant, Henry used to bring home $75,000 a year, but he has been without contracts for a year. Sally, a health care professional with her own company, brings home $5,820 a month in dividend income from her business. They have a child, 12. Their $850,000 home has no mortgage and they have $851,000 in investments, including undeveloped land. 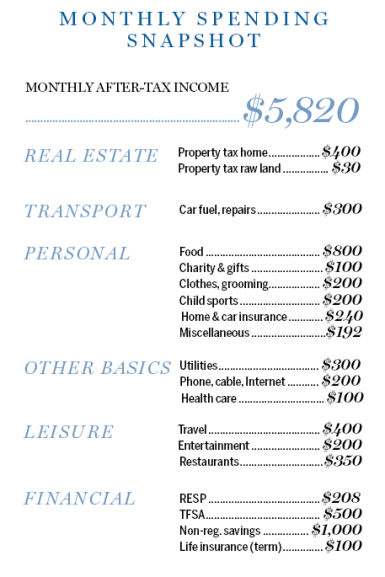 With perhaps 10 or 15 years to go to official retirement, they are caught in a bind. Henry wants to go back to work, but with business conditions in Alberta at present, it is hard. For planning purposes, therefore, they see retirement less as a plan than an acceptance of unemployment as almost permanent. “My problem is to know whether I can retire fully at 60,” Henry says. “The fact of the labour market is that I am already retired.”
Family Finance asked Derek Moran, head of Smarter Financial Planning Ltd. in Kelowna, B.C., to work with Henry and Sally. “They have good chance of making a transition from Henry’s effective retirement now to a full and planned retirement,” he says.
Sally’s income is in dividends, which are taxed at a lower rate than income, but which produce no base for Canada Pension Plan contributions or RRSP contributions. Their corporate and personal cash can tide them over for perhaps a decade or more as long as Sally’s business continues to thrive and their allocations, including savings, remain as they are now, at about $70,000 a year.
At present, the family budget has about $1,700 a month in savings. So, the family’s true cost of living, based only on what could be called ongoing spending, is just $4,120 a month. That is readily supportable by Sally’s income with no contribution from Henry.
The family RESP, which has a $38,000 balance, has attracted almost $6,000 of Canada Education Savings Grant supplements. The CESG adds the lesser of 20 per cent or $500 for annual RESP contributions, to a cap of $7,200 per beneficiary. If Henry and Sally add $208 per month for the next three years and obtain the CESG of $500 a year, then make no further contributions, the RESP will have about $51,100, enough for tuition and books for a first degree at any university in Alberta, Moran estimates.
Investments
The problem is not the picks, but the packaging. The couple’s investments should generate income of as much as $12,000 a year, but much of that is within RRSPs and thus not available for current spending without withdrawal from the RRSPs and payment of resulting income tax.
Asset management is the core of the family’s problem, Moran says. Henry has the ability to do much more with his $70,000 cash resulting from sales of a former taxable stock portfolio. There is space to top up their tax-free savings accounts with present balances of $50,000 in total. And there is $70,000 in Sally’s corporation, the umbrella for her health care business, which could be invested. They have $140,000 in cash, which, invested just in telecom stocks or regulated public utilities, could generate four per cent in dividends. That’s $5,600 a year before application of the dividend tax credit. It would be equivalent to about $7,200 of interest income.
Retirement
The couple’s TFSAs have a present balance of $50,000. They can use cash to top them up to $46,500 each or $93,000 total. If they then add $5,500 each per year, and grow the money at three per cent a year after inflation, they will have a combined $355,616 at their age 60. That would support payouts of $16,100 in 2016 dollars for 35 years.
If $43,000 is taken from personal cash to top up the TFSA accounts, it would leave $27,000. Adding in the $70,000 in Sally’s business, they would have $97,000 in cash, including retained earnings. If this sum grows at three per cent over the rate of inflation, it would become $151,100 in 15 years in 2016 dollars. That would support annuitized payouts of $6,825 for 35 years.
Sally saves diligently in her corporation. Starting with a zero balance for new retained earnings, if she banks $10,000 a year for 15 years to her age 60 and gets a three per cent return after inflation, she would have $191,600 in 2016 dollars. That would produce annuitized income of $8,660 a year for 35 years
The couple’s CPP contributions have been uneven. Henry has a long history of contributions, so we can allow him 80 per cent of the 2016 maximum of $13,110, which works out to $10,488 a year. Sally chose to take dividends and not to pay into CPP. So, we can set 50 per cent of full benefits for Sally, or about $6,555 a year. Each will get full Old Age Security at 65, $6,846 a year in 2016.
Adding it up and using age 60 as their retirement start date, the couple would have income of $47,200 from RRSPs, $16,100 from TFSAs, $6,825 from taxable cash in Sally’s business and $8,660 from new savings in the business, for a total of  $78,785 a year. There is no tax on TFSA payouts. If all this income split and taxed at a 10 per cent average rate, the couple would have about $6,000 a month to spend.
At 65, they could add Henry’s $10,488 from CPP, Sally’s CPP of $6,555 and two OAS payments of $6,846 each for total annual income of $109,460. Split and taxed at an average rate of 13 per cent, they would have about $8,100 a month to spend, enough for a good deal more travel, help for their child or donations to good causes.
(C) 2016 The Financial Post, Used by Permission